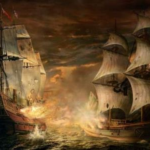 This article mainly focuses on the question who discovered North America first. Was it really Columbus? Maybe Vikings? Or did Chinese do that earlier than Europeans? Since there were a large number of indigenous people living in North America, the discovery of North America was only a beginning of the communication between American civilization and Eurasian civilization.

As we know, the so-called Americas are consist of the continents of North and South America, together they are the only land wholly in the Western Hemisphere of Earth. Divided by the Panama Canal, the two continents comprise the “New World”. As the Americas do not border with Asia, Europe or Africa, for ages there was no communication between these continents.

No direct communication between the Americas and Eurasian continent was established until the discovery of the New World. But the arrival of Europeans also led to the end of American civilizations, such as the Inca Empire and the Aztec Empire. Without communications with the outside world, the American civilizations grew slowly and were soon conquered by European invaders.

However, through archaeological discoveries, it has been proved that voyagers from Europe and Asia had arrived in this land before Columbus. For example, the Olmec civilization created by the natives in North America was very similar to the Chinese civilization. This just makes us wonder: did ancient Chinese got across the ocean and reached North America? Meanwhile, the proofs of Viking activities were also found in North Canada, making the identity of the discoverer of North America even more mysterious.

This is now a common view in academia and also written in the textbooks of the most countries. As is known to us all, Christopher Columbus was an Italian-born explorer. In his first voyage in 1492, he landed in somewhere in the Bahamas, he named it “San Salvador”. But it was not “Japan” in his plan. In the following three voyages, Columbus arrived in the Greater Antilles, Lesser Antilles, Venezuela and the Central America, which he declared to be terriorities of the Spanish empire. Till his death in 1506, he still believed he had arrived in India. What he did not know was, his discovery of the “New World” led to the revival of a notorious industry, piracy.

The theory that Vikings discovered North America is agreed by many historians. Speak of the European activities in North America, we have to mention Erik the Red, the man who discovered Greenland. He also had a son named Leif Erikson, who followed in his father’s footsteps and continued to explore the unknown world. He arrived in many places in Canada, United State and Mexico. His travel stories were recorded in the Voyages to Vinland. Some people believed that he discovered North America in around 1000 AD, which was nearly 500 years earlier than Columbus. In 1964, US president Lyndon Johnson proclaimed October 9 to be the Leif Erikson Day, in memory of this European explorer who first set foot on North America continent in the history.

In Newfoundland, Canada, some copper fasteners and a stone spindle were discovered here, together with the ruins of the foundations of six houses. And someone discovered a Viking toolkit in 1936. There were various tools inside, including sledgehammers, drills, saws, axes and pliers, almost everything. Also, in the 1970s, archaeologists Helge Ingstad and Anne Ingstad excavated a historic site in L’Anse aux Meadows, Newfoundland, where there was a ancient Norse village. They found the ruins of eight peat-turf houses, a number of Norse-style fireplaces, a smithy, some melt iron and a few nails along with some other items, which were made in late 10th century and early 11th century. 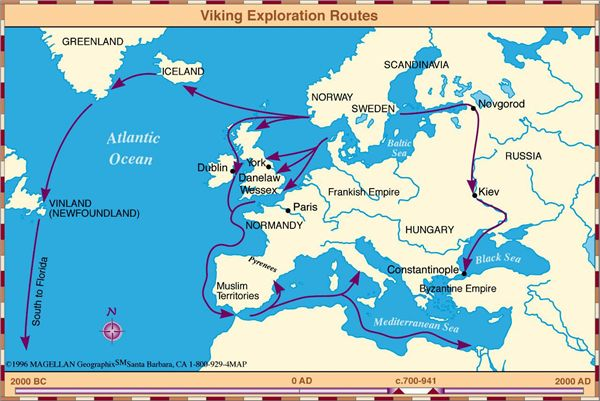 There are three different views about the discovery of North America by Chinese: the troops of Shang Kingdom reached the Americas; Xu Fu, a court sorcerer in Qin Dynasty, led three thousand young boys and girls to the Americas; Zheng He’s fleet arrived in the Americas in Ming Dynasty.

The troops of Shang Kingdom reached the Americas

In 1046 BC, Zhou Kingdom launched an operation to conquer Shang Kingdom. The two troops had a major battle in Muye, where Shang troop was defeated and King Zhou of Shang burnt himself. As a result, the Shang Kingdom fell. However, hundreds of thousands of Shang civilians and soldiers mysteriously disappeared. In 20th century, there rose a historical hypothesis that Shang people sailed eastwards to the Americas. American historian John McNeil mentioned in his book The History of Human Society that, the ancient jadewares excavated in United States and Mexico were very similar to those made in Shang or Zhou Dynasty in ancient China. This might be a strong evidence for the hypothesis.

In Mexico, some mysterious symbols were also found and believed to be developed from the oracle bone script in ancient China. Accordingly, it seems we can assume that Chinese arrived in North America in 1300 BC, which was nearly 2800 years earlier than Columbus. On the Indian-style carved stones, jadewares and some other potteries excavated in Mexico, nearly one hundred and fifty symbols were found, which were also similar to the oracle bone script.

Xu Fu sailed to the Americas

As you might know, Qin Shi Huang, the first Emperor of Qin Dynasty, was extremely eager to find the secret of immortality. Thus, Xu Fu, a court sorcerer, was ordered to look for the elixir of life. To finish the job, Xu Fu took three thousand young boys and girls with him and sailed eastwards from Shandong. They reached South Korea first, and then arrived in Japan. It is said that he later became the founding emperor of Japan, the Emperor Jimmu.

Another theory is, after Xu Fu reached Japan, he found there was an unknown world to the east of Japan. So he sailed further east following the Kuroshio current in Pacific, by way of Hawaiian Islands he finally reached the Americas and never returned. Square rocks carved with Chinese seal characters discovered in Hawaiian Islands, and the ancient arrows with Chinese seal characters excavated in San Francisco might be left by Xu Fu’s men.

There also lived some yellow people in somewhere in Venezuela near the Gulf of Mexico. Their clothes were similar to ancient Chinese costumes, while their faces and accents were also close to Chinese people. These men called themselves “descendants of the medicine seekers”, which reminded us of the Xu Fu Story.

During the Zheng He’s voyages, he sent some squadrons to sail in other directions with fixed dates to return. But one of these squadrons was one year later to join the main fleet. Many people suspected that this squadron very likely arrived in the Americas, or even made a voyage round the world, thus were one year late. But all the detailed records about Zheng He’s voyages were lost, so where this squadron had been to remains a mystery.

There were wrecks of ancient Chinese ships and remains like rock anchors and fishing gears founded at the bottom of the Caribbean Sea. The founder of the theory that Zheng He discovered the Americas, Gavin Menzies, offered a inference that these wrecks were some of Zheng He’s ships sunk in the Caribbean Sea in the December of 1421. If this inference is true, then it can be proved that Zheng He discovered the Americas one hundre years earlier than Columbus.

In Venice, Menzies found a map drawn in 1459, which was suspected to show the American continent and the Cape of Good Hope. But the Cape of Good Hope and American continent were respectively discovered in 1479 and 1492, how could they be shown in a map drawn in 1459? Therefore, Menzies believed this map was drawn by Chinese, and most likely Zheng He. Accordingly, many people suggested that it was Zheng He who discovered the Americas first.