There are creatures of all sorts in the Marvel Universe. Apart from human on the earth, there are various alien races and even paranormal creatures similar to venom symbionts in this universe. Certainly, there are also many powerful deities in the Marvel Universe. Some of them are gods from mythologies, such as the most familiar superhero Thor, who is the god associated with thunder, agriculture and war in Norse Mythology. Do you know any other Marvel characters who are deities from mythologies? First of all, let’s take a look below. 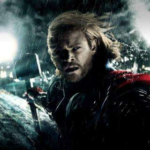 Thor is a superhero in the Marvel comics who first appeared in the book Journey into Mystery. As the son of Odin and Jord, Thor Odinson was born in a Norwegian cave. He was later brought back to Asgard, raised together with Loki, the son of jötunn Laufey, and finally entitled to use the powerful hammer, Mjölnir. He is also the guardian and heir of Asgard.

Due to his increasing arrogance, Odin exiled he to the earth so that he could learn humility in human world. He lived in the human world as Dr. Donald Blake without the memory of Thor.

Afterwards, he fell into a mountain creek on a trip to Norway. There he happened to find a wooden cane which became the Mjölnir after hitting the ground. From then on, Thor restored his status and power, and became a superhero protecting the earth. Thor’s enemy Loki, the natural son of jötunns and adopted son of Odin, also appeared soon after and began to oppose Thor. Loki once tried to play off Hulk again Thor, but only leading to the solidarity between Thor, Iron Man, Hulk, Wasp and Ant-Man, as well as the founding of a superhero group – The Avengers. 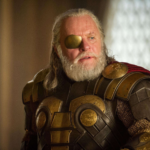 Odin Borrson is a character in Marvel comics who first appeared in the book Journey into Mystery. His prototype is the same-name lord god in Norse mythology. He is the natural father of Thor and adoptive father of Loki. Gungnir is his main weapon and symbol of power (although as a former avenger he used the Mjölnir one million years ago). He has a family feud with the jötnar.

Odin was portrayed by Anthony Hopkins in the 2011 film Thor, 2013 film Thor: The Dark World and 2017 film Thor: Ragnarok. The flashback in the third film indicates that Odin locked Hela away when she turned dangerous. After that, Thor and Loki found Odin in Norway where Odin revealed his imminent death, and Hela would be set free as a result. 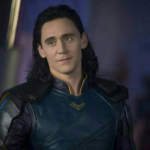 The Loki in Norse mythology is the god associated with fire and trick. His natural parents were both jötnar, while he was adopted by lord god Odin and raised together with Thor after the war between Asgardian deities and jötnar. He had been salivating over the throne of lord god, therefore he turned an enemy of Thor and his avenger friends. 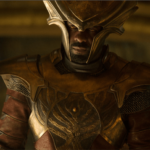 He stands on the Bifröst bridge in observation of any possible attack. Also, as the guardian of Asgard, he defends the gate of this realm from any intruders, and is one of the most trusted servants of Odin. In the 2015 film Avengers: Age of Ultron, Heimdall was portrayed by Idris Alba. But he did not appear in any scenes but only in Thor’s illusion. In the 2018 film Avengers: Infinity War, Heimdall was still portrayed by Idris Alba.

In the beginning of the film, Heimdall activated the Bifröst bridge to send Hulk back to earth with his last strength. Soon after he was killed by Thanos with Corvus Glaive’s spear. 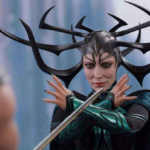 Hela is the queen of a realm of the same name. She is the youngest child of Loki, and sister of Fenrir and Jörmungandr. In Marvel Universe, Hela is no longer Loki’s daughter, but the first child of Odin and Thor’s elder sister. Fenrir, who is Hela’s elder brother in Norse mythology, becomes her ride. Despite being Thor’s elder sister, Hela is one of Thor’s enemies. And Hela is very powerful, even Thor cannot defeat her. 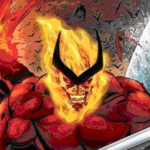 Surtur is a supervillain in Marvel comics based on the fire giant Surtr from Norse mythology. Surtur is a key character during the Ragnarök, and the ruler of Muspelheim who possesses the giant sword Twilight. He once had a war with Odin, but Odin succeeded in preventing Surtur’s invasion after his brothers Vili and Vé sacrificed their lives. Surtur restored the cracked Mjöllnir after dealing with Sól with the condition of opening the road to Vanaheimr.

In the 2017 film Thor: Ragnarok, Surtur had Thor imprisoned in his lair in Muspelheim, and revealed that Odin was not on Asgard where he planned to unite his crown with the Eternal Flame to cause Ragnarök. Thor managed to defeat Surtur and captured his crown. After escaping from Surtur’s lair, he put Surtur’s crown in the vault in Asgard. Afterwards, during the battle between Hela and Asgard, Thor had an illusion of reviving Surtur by putting his crown in the Eternal Flame, because this was the only way to defeat Hela.

After Surtur was reborn, he caused Ragnarök by destroying Asgard, and thus defeated Hela. During this disaster, Thor and the surviving Asgardians fled to earth in spaceships. 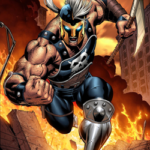 Ares is the god of war in Greek mythology, one of the Twelve Olympians, and the son of Zeus and Hera. In Marvel comics, there is also an Ares based on the Ares in Greek mythology. This Ares is also an avenger, however, it is not the Avengers, but the Dark Avengers. As a god, Ares is nearly immortal and also a top fighter in close combat. He is a powerful god, it is neck and neck between him and Thor. 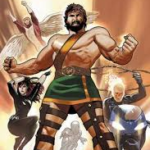 Heracles is the greatest hero and the god of strength in Greek mythology. As indicated by his status, Heracles is of both extraordinary bravery and exceptional strength. Similar to Hulk of the Avengers, Heracles has super strength and greatly developed muscles, which enable him to jump or step over a very long distance. The difference between him and Hulk is, Hulk is usually invloved in close combat, while Heracles prefers to use his club althrough he is also good at hand-to-hand fighting. Heracles is an intimate friend of Thor. 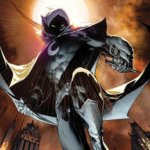 Khonsu is the Ancient Egyptian god of the moon, light and night. His name means “traveller”, but he also has the titles of “Embracer”, “Pathfinder”, and “Defender”. Khonsu also exists in Marvel Universe with the name Khonshu. The readers of Marvel comics might know a little bit about the superhero Moon Knight. Marc Spector was a mercenary gravely injuried by his client during the mission. Before he took his last breath, the statue beside him turned into the Egyptian moon-god Khonsu and brought him back to life. Since then Marc had been the proxy of Khonsu and the superhero Moon Knight.

What we discuss above are the deities derived from mythologies in Marvel Universe. Among them, the Asgardian gods are deities in Norse mythology, for example, Odin is the lord god and heimdall is the guardian god. Do you have some more to share with us?