Who are Geri and Freki?

Geri and Freki. In Norse mythology, they are a pair of wolves kept by Odin. The name Geri means edacity while Freki means overeating. Althrough it is generally believed that they are wolves, but according to the Poetic Edda, they are hounds. When Odin is at the Valhalla, they just lie under the table and wait for the food from Odin who is drinking mead. 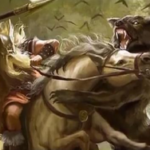 Fenrir is a monstrous wolf in Norse mythology. He is the first child of Loki and jötunn Angrboða, elder brother of the world serpent Jörmungandr and the goddess of death Hel, and is deemed as “the devil monster who can shake the ground”.

The deities tried three times to bind him with different shackles, but only the third time they succeeded when Tyr sacrificed one of his arms.

Fenrir is the most known monster in Norse mythology. As a huge wolf-shape beast, it is said that when he opens his mouth, his both jaws can support the sky and earth. Due to his violence and cruelness, he was kept in captivity by the deities till the Ragnarök, then he swallowed Odin. 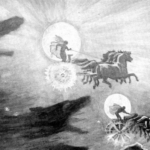