pirates has been a regular type of role in the film industry since the invention of film. The first pirate film known so far is a short silent film based on the book Treasure Island in 1908. But unfortunately, the American Film Institute believes that this film has been lost and there is no copy of this film surviving.

With the progress of film technology, pirate-subtype action films also significantly developed. There was at least one blockbuster about pirate in almost every decade of the 20th and 21st century. No matter heroes or villains, it is undoubted that pirates easily grab the attention of audience! To further prove the Johnny Depp’s exceptional acting skill in portraying Jack Sparrow, here are ten of the most impressing pirates ever appeared in the films below! 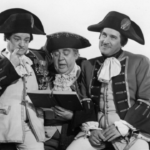 Charles Laughton is one of the greatest character actors who make films even more perfect, as he could play dramatic roles with his highly regarded performance. No matter debauched King Henry VIII in The Private Life of Henry VIII, or passionate Sir Wilfrid Robarts in the Witness for the Prosecution, his performance was always on a par with his legendary competitor Laurence Olivier.

In the film Abbott and Costello Meet Captain Kidd, Laughton created the image of a funny pirate who was always boasting loudly, Captain Kidd. He created a strong comic effect with comical body movements, and this hilarious and vulgar role was in a sharp contrast to his distinguished image in real life. Laughton added a pantomime-style humor to this role. It seemed that he quite enjoy such passionate and funny performance. Although this role was often considered not as good as some other classic images at the summit of his career, but his impressive performance made Captain Kidd absolutely one of the best pirates onscreen. 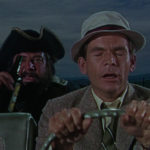 Peter Ustinov was also a successful character actor who had the skills and experience to infuse passion into his performance. No matter Detective Hercule Poirot in the film Evil Under the Sun and a few TV films based on Agatha Christie’s works, or a funny Fu Manchu-style Chinese villain in One of Our Dinosaurs Is Missing, he always managed to “re-create” himself in every role.

In the Blackbeard’s Ghost, he played a fiery-tempered pirate Captain Blackbeard in a humorous way, added some comedic viciousness to his comic performance. He was like a live-action incarnation of the classic pirate Captain Hook in the Disney animation Peter Pan (1955), but Ustinov added comedic humor, vigor and vitality to this image and put up a star performance. 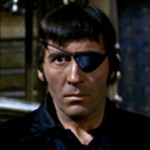 It was absolutely one of the strangest ideas for a filmmaker to let Christopher Lee play pirate. The roles he played before were all of sophistication and charming maturity (that’s right, even the roles like vampire, mummy or Frankenstein), but pirate seemed not match his personality and film image, would it work? However, in the film Pirates of Blood River, he put up extremely convincing performance with an authentic French accent and a threatening look throughout the film.

In the work library of horror film specialist Hammer Films, the Pirates of Blood River is apparently alternative. Judging from the composition of this film, it seems to be an uncommon pirate action film. Christopher Lee perfectly shaped this pirate into a typical villain character, who is gentle, cultivated but extremely dangerous. Meanwhile, this role also brought him more lines and character development, therefore, Captain La Roche was one of the impressive but little-known villain characters played by Christopher Lee. 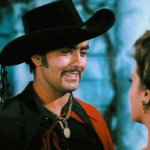 Do not confuse it with Natalie Portman’s same-title film about a psychopathic ballet dancer. In this film, Tyrone Power played a young pirate who helped notorious pirate-turn governor of Jamaica Henry Morgan to attack the other Caribbean pirates during the peacetime between Spain and England. Tyrone Power brought romantic elements to this role with his impressive performance and many action scenes.

He had rakish and free-spirited acting skills and impressively created the image of a pirate who challenged the English authorities out of love. His role perfectly incorporated pirates’ capricious morality (he kidnapped the daughter of former governor and made her fall in love with him) and upright heroism (he cleared the name of Morgan and helped him to completely eliminate rampant piracy). Jamie Waring was a kind and amiable person, but he was also rakish and rascal so as to avoid being fooled. Basically, he was very popular with the girls, and all the boys would regard him as an model! 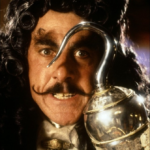 Although the film Hook was widely criticized as it failed to reflect the true essence of the characters in the original work of J. M. Barrie, but in spite of this, Dustin Hoffman’s performance as Captain Hook was wonderful. He exuded an extremely discomforting atmosphere while focusing on creating an antic exaggerating style, making people fear about him, especially the kids. The fact that he kidnapped Peter Pan’s children may further prove the often-mentioned opinion: he was actually a pedophile.

Hoffman looked very funny, maybe it was because of the exaggerated costume and makeup, but the weird style also scared people. In addition, Captain Hook was an exaggerated and pretentious character, even a little over-acting would make people resist. But Hoffman’s performance was impressive and intriguing! Hook might not be an outstanding pirate film, but the character played by Hoffman was absolutely attractive to people of all ages. It would not just scare you in your childhood, but also let you realize his excellent performing skill when you grew up. 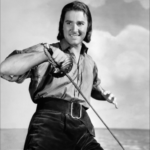 Errol Flynn was one of the most successful romantic action heroes in the early sound films of 1930s. By playing characters like Robin Hood and the Earl of Essex, Flynn developed his personal charm in creating pleasing hero images. He still played a hero in the Captain Blood, but this time his role of pirate provided him more freedom. It was the first film where Flynn played the leading role, and also the first time he worked with actress Olivia de Havilland and director Michael Curtiz (with whom he later worked again in the film The Adventures of Robin Hood).

In the film, the role Flynn played was originally a doctor, but he turned a pirate after being charged with treason unjustly and began to take his revenge on the brutal ruling system. He brought an arrogant and pompous personality to this role, and thus easily stimulating the emotions of audience as the heroic protagonist throughout the narrative process. He became a pirate basically for the good of his men and country, therefore, it was a rather special one among so many classic Hollywood pirate films. As the perfect candidate for this role, Flynn also provided us a memorable performance. 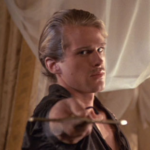 Cary Elwes is far from a great actor, but his performance as Westley in the classic fairytale fantasy film The Princess Bride in 1980s was absolutely great. This role played by Elwes was comparable to the pirate image in traditional fairy tales: his childhood sweetheart was kidnapped by an evil prince who forced the girl to accept the engagement, and he became a pirate and launched a rescue operation. Fully using his advantage, Elwes added some subtle humor to this character which had many romantic and action scenes, making his performance very impressive and convincing.

However, Elwes kept his dramatic performance while using his talents of tact and humor, never weakening the compactness and tension of overall narrative with time-to-time hilarious humorous scenes. This role defined the most successful moment in his acting career, his pirate image became the model of a whole generation. Westley was a real hero, not just because of his kindness and justice but also his loyalty to the one he loved. He was a typical positive pirate hero. 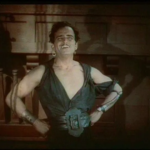 Douglas Fairbanks was the earliest action hero, also a silent film star who was obsessed with epic-style stunts and good at playing classic heroic roles. In the film industry, he was the pronoun of hero. During the 1920s and 1930s, he was stratospherically popular and once named the king of Hollywood. In the silent pirate film the Black Pirate, he played a nobleman who had to be associated with pirates in order to revenge his father. In the silent films where he acted before, Fairbanks’ performance was often supplemented with exaggerated facial expressions and unexpected body movements. But in this film, he tried to avoid overacting and portrayed a convincing pirate image.

In fact, his image involving black shirt, black trousers, earrings, eye patch and hood had been a classic standard way of dressing since the release of this film, which did not only define this famous pirate film but also became the pronoun of early Hollywood films. Although in the films of the 1920s, pirates were usually bad guys, but the role played by Fairbanks was a hero who defeated evil pirate leader, revenged his father and saved the heroine. 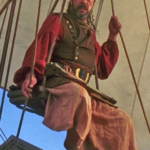 This film is often considered the best adaptation of Robert Louis Stevenson’s classic pirate story. Thanks to Robert Newton’s excellent performance, Long John Silver was presented as a colorful character. As the role was precisely based on the original work, Long John Silver was completely restored by Robert Newton, especially his horror and craziness. He would look at you and cut your throat enjoyably. He was more insidious and filthy than villains you could image from the other Disney films, but Newton easily caught the evil nature of this character.

So to speak, Robert Newton set the onscreen standard for all the pirate images. He enjoyed working with the best film actors and actresses, but also knew how to restrain so as to avoid embarrassing situations. For underage audience, he was interesting and scary, which was a total reflection of children’s imagination about pirates. Making you want to become him while revering him, Newton’s performance made this character one of the most classic pirate onscreen. Actually, Newton’s performance was successful because he was nothing short of another Long John Silver.

1.Jack Sparrow- Pirates of the Caribbean: The Curse of the Black Pearl (2003) 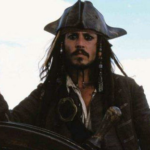 In essence, Captain Sparrow portrayed by Johnny Depp in the first film of Pirates of the Caribbean series is very interesting and vulgar. He was a man of little moral constrain and a typical anti-hero who was switching between hero and villain. Depp infused a sense of cowardice into Sparrow, and thus providing a lot of jokes, but he would show his courage and fearlessness at the last moment. Sparrow represents the various elements we have. He is a reluctant hero, presenting a traditional pirate image: only for himself!

Compare with Captain Barbossa played by Geoffrey Rush, Depp’s performance exuded pleasing charm. Depp fused different styles such as comedy, action, drama and thriller into the duels in the film, creating the most quintessential pirate image in the history of film.