Piracy exists in both the East and West, thus it is a global social problem. Pirates in both sides of the world share the same forming reason and composition, meanwhile, they also have some differences due to the influences of different cultures and customs. But in one year, significant events regarding piracy occurred in both the western and eastern world.

In the year of 1588, it was the late phase of Ming Dynasty in China when Emperor Wanli was in power, while in England Elizabeth I was on the throne. There was no substantive communication between China and England, but in this year significant events regarding pirates occurred in both countries.

Right in this year, with the help of pirates, English navy defeated the Spanish Armada and established their sea hegemony. And in the East, Qi Jiguang, a prestigious Chinese general who led the fight against pirates, passed away.

In the 16th century, there were numerous English pirates looting Spanish merchant ships in the Atlantic. Later when the Spanish Armada was on expedition to England, they were called up by the English navy and made contributions to the victory over Spanish.

In the July of 1588, England and Spain fought a historic naval battle in the English Channel. At that time, the Spanish Armada was known as the most powerful fleet in the world, it had more than 130 large warships, 7,000 sailors and 23,000 infantries; while there was no English ship of comparable size as Spanish, in another word, there was a great disparity in strength between the both parties. But Elizabeth I’s determination boosted the confidence of English people. 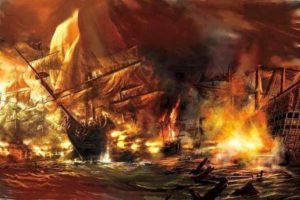 The English navy only had a little more than 200 small ships, mainly pirate ships, but the English adopted flexible tactics and fully exploited enemy’s weakness, the speed. Under the joint command of Lord Charles Howard, Francis Drake and John Hawkins, the English launched raids, guerrilla operations and fire attacks. As a result, due to heavy losses, the Spanish Armada commanded by the Duke of Medina Sidonia had to embarrassedly fled and make a detour from Scotland back to Spain.

In the mid-late Ming dynasty of China, the coast defense was so lax that the coastal area was often harassed by pirates consisted of Chinese and Japanese, which was called the Wokou in history. These bandits brought untold misery to the Chinese people, and even reached Nanjing. 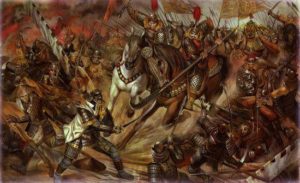 General Qi Jiguang turned the tide of the war. Since the current force was incapable, he recruited soldiers in Yiwu and Dongyang of the Zhejiang province, forged them into doughty soldiers, and created brand new tactics for them. With all these, he won a succession of victories. Eventually, together with Yu Dayou, another distinguished general, he led his troop eliminated the pirates along the Chinese coast. General Qi, the great hero of Chinese people, passed away in Penglai on January 17, 1588.