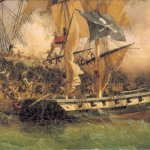 Nowadays, pirates still pose a great threat to merchant ships and civilians on the ocean. But it is as nothing compared to the time when the pirates were most rampant. Even the notorious Somalian pirates known to the world a few years ago, are just some nobodies in the history of piracy. The Age of Piracy is a real history time when the piracy was most rampant.

The period between 1691 and 1723 is called the Age of Piracy. In just about thirty years, pirates rampantly swept the world. By hijacking and looting ships, they snatched up a great amount of wealth and terribly affected the global trade at that time.

Why the pirates were so rampant in the Age of Piracy?

Privateering commission and the Age of Piracy 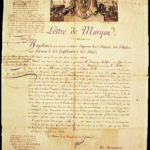 At that time, the vast ocean was the unconquered terriority to human. Whom does the ocean belong to? Should human follow some rules on the ocean? And what are the rules to be followed? These questions are worth thinking, but no more than thinking. On the vast ocean, pirates are outside the constraints of human civilization.

In 1492, with the support of Spanish royals, the great Italian explorer Columbus discovered the Americas. Later, after 200 years of development, Spain became the maritime overlord of the world at that time. The wealth all over the world was continuously transfered to Spain. The other European countries were envious about that but only to find they were not unable to compete with Spain. What should they do then?

One after another, the other European countries established the systems of privateering commission and enlisted many private armies (mostly pirates) to fight against hostile countries and other pirates. From then on, privateer captains who had such commissions could justifiably plunder ships of pirates and hostile countries. The only condition was that they turned in a fraction of their “gains” to the government.
Under this system, most of the captains who had privateering commissions held two identities, pirate and military. Most representatively, Henry Morgan.

Henry Morgan was a Welsh pirate, and one of the most notorious bandits in the Caribbean.
In 1635, he was born in the manor of a wealthy Welsh family.
He served in the English military in 1655 when the English navy seized Jamaica from Spanish.
In 1663, Morgan led some raids in the Central America, attacked Spanish settlements and looted a lot of treasure. At that time, Morgan was a pirate leader.
He became a vice admiral of English navy in 1668, commanded a fleet of 15 ships and more than 900 sailors. Meanwhile, he was elected the head of all the pirates in Jamaica. Morgan’s dual identities made him the “king of pirates”.
Later in 1674, Charles II of England knighted him and appointed him as vice governor of Jamaica. There he lived as a rich man and a respected plantation owner.
However, the “king of pirates” died tragically in 1688. Four years after his death, the crazy Age of Piracy came.

The wealth robbed by pirates was piled up here like mountains, sometimes the pirate ships full of spoils could not even get their turns to unload and had to wait in the harbor. All the businessmen here knew an unwritten rule: never asking the origin of merchandises, nor taking about their former owners. They knew these merchandises were filthy lucre but never turned them down.
This was the most evil and depraved city in the human history. All sorts of people came here with the same intention of make a killing. There were Dutch, English, French, German, Scandinavian, Spanish, Portuguese, Irish, African and mulatto, you name it. Silks from China, spices from Indonesia, industrial products from England, you could find almost everything here. Of course, what you could see most frequently was gold, silver and jewelries.

June 7 of 1692, a bustling day in Port Royal as usual. But this Sin City was doomed to be punished by God.
At 11:47 am, suddenly the earth trembled, followed by increasingly violent shakings. Huge cracks appeared on the ground and buildings collapsed one after another. The earth rose and fell like waves. Just liked being boiled, the ocean raised billows and smashed all the ships in harbor. After the most violent tremor, two thirds of the city submerged under water. Together with countless treasure, Port Royal sank into the ocean.
However, the pirates did not take God’s warning, instead, they reassembled, re-established the fleet, and started next round of plundering.

A pirate of manners——Bartholomew Roberts the Black Bart 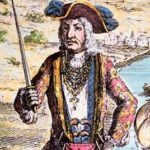 Greedy and unruly pirates lacked cohesion and were doomed to be disunited. Pirates should have manners. Bartholomew Roberts was the first to realize this.
Roberts was also born in Wales and served on a privateer in the early years. He talked culturedly, liked to wear gorgeous black gowns and various jewelries, and was fond of tea instead of alcohol. That’s the reason why people call him the Black Bart.
In the June of 1720, privateer Royal Rover intruded into harbor of Trepassey and looted over 150 ships; the best one among those ships was picked out and renamed Royal Fortune as Roberts’ new flagship.
Roberts was one of the pirate overlords who first developed and extended the Pirate Code.

The famous Roberts’ Articles or the Twelve Commandments of Pirates include:
Every man has a vote in affairs of moment.
Every man to be called fairly in turn, by list, on board of prizes.
No person to game at cards or dice for money.
The lights and candles to be put out at eight o’clock at night.
To keep their piece, pistols, and cutlass clean and fit for service.
No boy or woman to be allowed on board.
To desert the ship or their quarters in battle, to steal properties of fellow pirates, to conceal secrets or properties, was punished with death or marooning.
No striking one another on board.
No man to talk of breaking up their way of living, till each had shared one thousand pounds.
Any man wounded or injuried was to be provided for.
The Captain and quartermaster to receive two shares of a prize; the gunner, cook, doctor and boatswain, one share and a half; other officers one and quarter; sailor, one share.
The musicians to have rest on Sunday, but the other six days and nights, none without special favour. Any one who breaks any of these commandments should receive harsh punishment.
Despite of strict disciplines, Roberts had no intent to rule the world. Instead, his motto was “life is too short to enjoy”.

In the morning of February 10, 1722, he was killed in a fierce battle on Guinean coast, when a grapeshot struck him in the throat. He died instantly. Bartholomew Roberts, the last great pirate captain in the history of piracy, ended his “happy but short” life. After the last protagonist left, the thirty-year “Age of Piracy” came to its end in history. 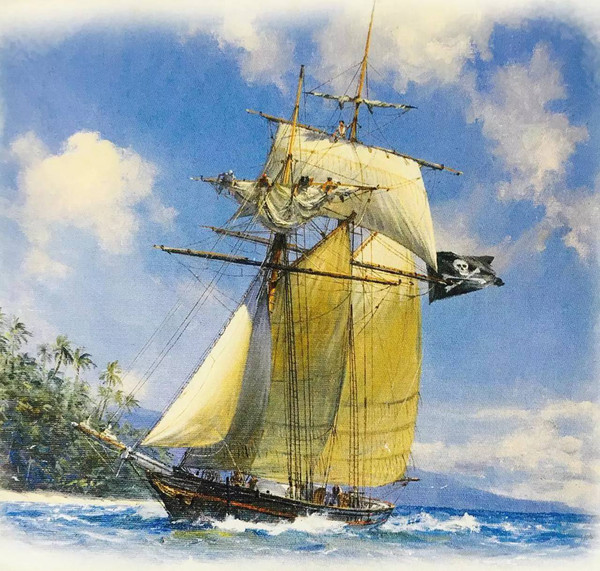 On March 14 of 2006, on the Grand Banks of Newfoundland, divers discovered a sunk galleon. There lay a storage box between rotten deck and the canons covered by barnacles. In this box, people found a logbook which recorded the circumnavigation of Captain William Lubber’s ship Seacat from September 13 of 1723 to June 1 of 1726.
The purpose of this circumnavigation was to catch female pirate Arabella Drummond. Judging from the damage of sunken Seacat and Captain William Lubber’s note, Arabella Drummond made a well-planned escape. But surprisingly, Drummond’s treasure is still hidden on some secret island and has not yet been found.
A part of the treasure map was missing, but in Captain William Lubber’s note, it wrote “I have found the missing part of the treasure map, and hide it in this logbook”. ”

The conclusion of related research indicates, the naval battle where Captain William Lubber lost his life can be taken as the end of the Age of Piracy and written into history. Because of this discovery, the Age of Piracy might be extended for long and thrilling three years.

Thrilling and unpredictable voyages
An imprecise map, a compass unusable in rough weather, a pair of crude divider calipers, a portable sundial device, a galleon which sets many sails. No matter a privateer captain or a pirate, those were the best devices they could get.

Facing the infinite unknown, what the captains and sailors could rely on at that time? Maybe just firm faith, strong body, and God’s blessing. With all these, time and time again the people who sailed in the unknown world discovered mysterious islands, new continents or the destinations they sought long at the horizon.

That was the extraordinary experience in the Age of Piracy. With courage, faith and perseverance, everyone could make a unknown place part of the known world, and the tracks on chart would be his or her highlight of life and epitaph.
Today, huge ships, satellite navigation, weather forecast and detailed charts have made the rough ocean no more perilous. But the legends about Age of Piracy still attract those who yearn for freedom and advanture.

Human will never be confined to places where they were born. They keep exploring, and have discovered and conquered mountains, rivers, islands, continents and oceans. They never stop, even when their footprints have been all over the blue planet. In 1969, representing the human, an young American left his footprints on the moon for the first time.
One of human’s dreams is just like what the astronaut Mark Watney says in the film The Martian, “Mark Watney, Space Pirate”. ”