As we all know, the land takes up about 29% of Earth’s surface while the ocean occupies the rest. The vast ocean provides pirates with great surviving space. When there were no ironclads or heavy artilleries, there was no effective ways to suppress the pirates’ attacks on merchant ships and civil ships, or effectively stop pirate groups from growing larger. 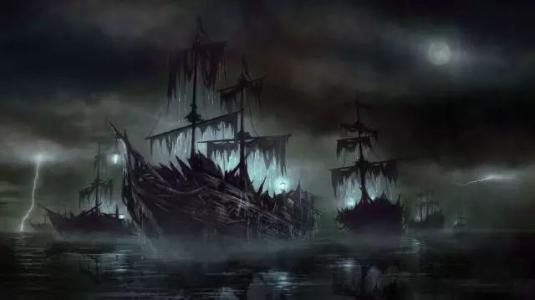 As a result, the governments had to offer amnesty and enlistment to pirates. The pirates obtained a large sum of money, even noble titles, and thus entering the upper class. There were three pirates in history who became senior government officials after accepting the amnesty.

The Viking who fought on foot—the Duke of Normandy 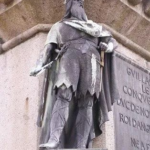 The Duke of Normandy rose from pirates to vassals, and became kings later. Expanding from the Nordic to the West Europe in a few centuries, their road to success was legendary.

Since the Middle Ages, Nordic pirates had swept the coastal region of Northern and Western Europe, even left their footprints in the heart of Europe. Up to this day, Europeans are still in awe of the Vikings. These bandits came in groups, always sailed the dragon ships to rob and kill. But they also left rich cultural heritages, and a few “descendant” countries where the people are as doughty as their ancestors.

There were a gang of Vikings whose leader was named Rolf. As Rolf was too tall and big for horses to carry, he went to everywhere on foot, and thus was called “Rolf the Walker”. 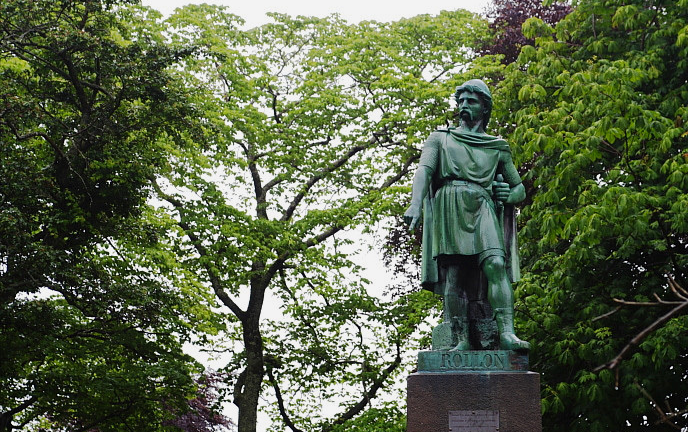 Around 900 AD, Rolf and his men were focused on looting Franks’ settlements. Usually they set off from Norway, went south along the coastline of Netherlands and France, then sailed upstream in the Seine River. The Vikings started looting the towns and farms once they arrived at Franks’ settlements. 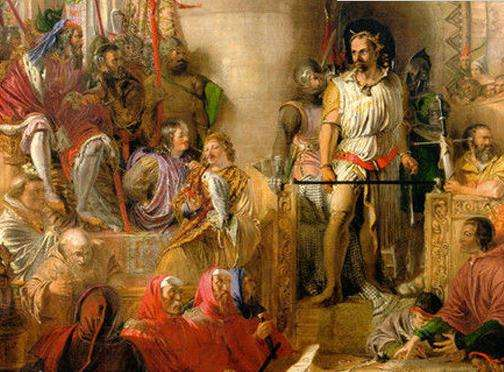 During a raid in 885 AD, Rolf and his men went straight to Paris, bringing a great shock to French people. In the year of 911, under Rolf’s lead they arrived at the gate of Paris again and besieged the city. At that time, Charles the Simple was the king of France. He had no choice but to give up his dignity and had peace talks with the Vikings.

As a result, Rolf got Rouen and nearby lands which were located at the estuary of the Seine River. As the descendants of Vikings who settled down in Northern France were called the Normans, accordingly this region was named Normandy, which means the land of Normans. And as a condition, he converted to Christian and became King Charlie’s vassal with the French name Rollo. After that, a large number of Vikings settled down here and gradually formed the Duchy of Normandy. 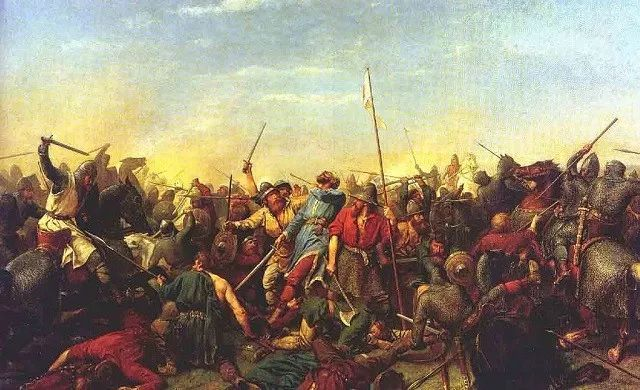 Based in Normandy, the Vikings started to organize expeditions to Southern Italy, Sicily, England, Wales, Scotland and Ireland, then immigrated to these areas. In 1066, the Vikings conquered England and their leader William the Conqueror was titled the king of England. From then on, the descendants of Viking pirates became the dominators of the British Isles. 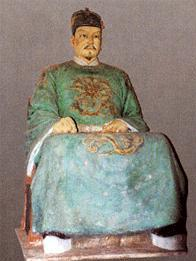 In China, the Yellow River basin and Yangtze River basin are where the earliest civilizations rose. Rich natural resources here also facilitated the prosperity of marine trade. Between the Tang and Song Dynasty, the Maritime Silk Road which started from Southeast China were established and once expanded to the Middle East and Africa. However, with the influence of “sea ban”, a large number of samurais and ronins who escaped from the civil war in Japan constantly harassed China coast, causing serious piracy problem. Although in the middle period of the Ming dynasty, thanks to general Qi Jiguang and Yu Dayou, the Japanese pirates were finally eliminated. But pirates like Zheng Zhilong came on the scene again in the late Ming Dynasty.

Zheng Zhilong started his pirate career in Hirado, Japan. After he left Japan, he established a new base in Taiwan. And he did not only found a strong private navy, but also create a government system based on that of Ming Dynasty, thus becoming a locality separatist power. The Ming government was unable to eliminate Zheng Zhilong, so they tried to enlist him instead. In 1628, Zheng Zhilong accepted Ming government’s terms and became a provincial magnate.

At that time, the Ming government was engaged in struggles with Jurchen rebellion in eastern Liaoning area and the internal civil unrest. Therefore, their control over local areas and territorial waters became weaker and weaker. Zheng Zhilong took this opportunity to develop maritime trade. In 1633, he defeated the fleet of the Dutch East India Company in Fujian waters. After that he controlled sea routes and collected docking fees, soon becoming the richest man in the country. Since Zheng Zhilong retook the maritime dominance in East Asia 200 years after Zheng He’s fleet, he was regarded as another important figure in East Asia during the Age of Discovery. 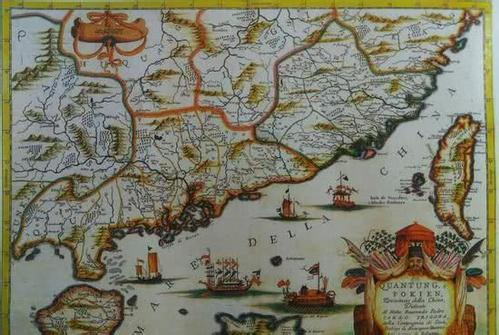 Beijing, the capital of Ming Dynasty, was captured by uprising peasants in 1644 and the emperor committed suicide. The Ming officials in Nanjing re-established central government, but it was very fragile. One year later, this provisional government collapsed under the attack of Jurchens, Nanjing and the Emperor became the invaders’ war trophies.

Under such circumstances, Zheng Zhilong put a prince on the throne in Fuzhou and became a marquis in charge of all the Ming troops. This was also the peak of his political career.

However, in fear of Jurchen cavalries, he surrendered in 1645. To his astonishment, his son Zheng Chenggong chose an opposite road. He raised an army to fight against Jurchens and the Qing dynasty, finally founded the Kingdom of Tungning in Taiwan. It was Zheng Chenggong’s non-cooperation that caused his father’s tragic end—Zheng Zhilong and his close persons were executed in Beijing. 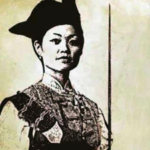 Qing dynasty was the successive imperial dynasty in China after the Ming dynasty. It followed many policies of Ming dynasty, including the sea ban. But the piracy in Southeast China increased instead of decreasing, and major pirates like Ching Shih constantly sprung up.

Ching Shih, or Cheng I Sao, was a prostitute in Guangdong who became the wife of pirate leader Cheng I later in 1801. Despite of her life experience, she was a capable and intelligent woman. With her help, Cheng I merged other pirate groups in the Pearl River Estuary area.

However, Cheng I died soon after the founding of his piracy cartel. In avoid of their efforts losing in vain and the cartel falling apart, she stepped in her husband’s shoes and became the new leader. Also, she made a series of piracy regulations to enhance discipline and establish her authority. Her pirate fleet grew stronger under her lead. Moreover, she studied western artillery technologies and paid good money for advanced cannons. With better weapons, her fleet became even more powerful. According to historical materials, her fleet equipped with cannons earlier than the Qing government navy.
At her height, her fleet sacked every merchant ship they encountered, including foreign ships. Western fleets equipped with better weapons were no match for her mighty fleet, either. The Qing government quite feared about them and western countries extremely hated them. Even Qing-British united offensives could not defeat Ching Shih. 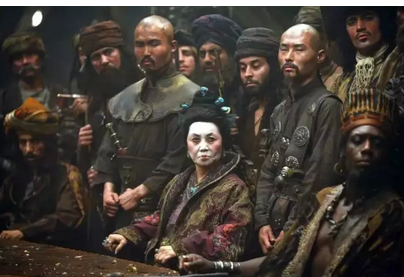 After the death of Cheng I, Ching Shih remarried Cheng I’s foster son, Cheung Po Tsai. With his help, Ching Shih solved the internal mess and led the cartel to the top. But as the result of internal power struggle, many pirate groups surrendered to the government. At last Ching Shih had to accept amnesty and capitulate. Ching Shih’s marriage with Cheung Po Tsai was granted by the emperor and both of them became military officers.
When Ching Shih capitulated, she had 1200 pieces of cannons, 270 ships and over 16 thousand men. That was quite an armada. In the First Opium War, she served as a military advisor to Viceroy Lin Zexu in battling the British Army. 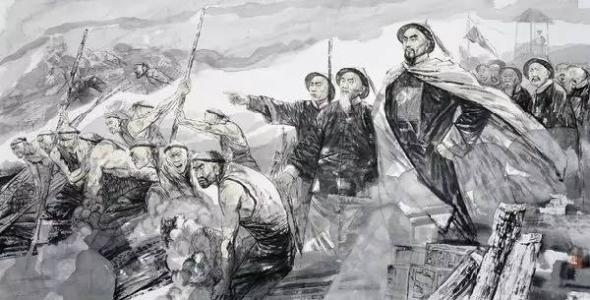