In the humam society, pirates are a special group of people. They are so distinctive because their life revolves around the ocean and they live in a heartless and cruel way. For the most people living on land, pirates are unknown to them and can only be learned on the television or in the books. In a word, those guys are stereotyped with bloodiness and brutality. However, they do exist and have as much soul and heart as us.

There were many well-known pirate groups in the vast human history. They sailed all over the world and posed great threats to merchant ships, fishing boats and even coastal towns. To this day, Somalian pirate groups are active in the Indian Ocean. To deal with them, many countries send out warships for escort missions. Similar pirating activities can also be found in Southeast Asia, such as the Strait of Malacca and Sunda Islands.

Compared to those notorious pirates in the history, the pirates today are trivial. The ancient pirates were so powerful that they even had great political influence.

Speaking of the pirates, we have to mention the Vikings. These Northern European pirates left their footprints over the vast Europe, expanded their range to the Caspian Sea and Palestine, and discovered Iceland and Greenland. Their influence also spreaded into politics, leading to the foundings of many countries. Even Russia has inseparable relations with the Vikings.

Who composed the Vikings?

The Vikings were a complex group conposed of different kinds of people. In Europe, they are believed to be Scandinavian peasants who did spare-time pirating, while some other people think they were Slav pirates exiled in the Nordic region. But anyway, Scandinavian Peninsula is the birthplace of the Vikings, even today the Nordic people are often nicknamed as the Vikings. But other than pirating, the Vikings also made some amazing and mature achievements in construction and jewelry manufacture, showing their remarkable artistic level.

Caribbean pirates were avtive in the Caribbean region of the Central North America. During the Age of Discovery, the Caribbean pirates was once up to 60 million in number, but their combat capabilities were no match for Vikings and their peers in the Mediterranean. Basically, they were nothing but a bunch of ronins or rogues, happened to become the most famous pirate group among the pirate world just because of the Pirates of the Caribbean film series.

Composition of the Caribbean pirates

Caribbean pirates can be deemed as “professional” mobs who risked their lives for money but were very cowardly. Mainly they were outlaws from Britain, France, Holland an Spain, therefore they were not so capable as pirates elsewhere. There are rumors that Caribbean pirates hid valuable treasures in this region, but in real life nobody has ever found it.

Pirates in the Far East

Pirates in the Far East can be distinguished into different groups, such as pirates active in the coastal area of Southeast China, and pirates in the Southeast Asia. They were doughty and tough, caused great damage in China and Southeast Asia. During the Ming Dynasty of ancient China, the notorious Japanese pirates became the biggest crisis for the Chinese government. Japanese pirates made great damage in rich provinces such as Jiangsu and Zhejiang, some of them even reached Nanjing, the secondary Capital of China at that time. Eventually, under the command of general Qi Jiguang and Yu Dayou, Chinese forces suppressed the Japanese pirates in this region. However, piracy in the Southeast Asia was still rampant. Chen Zuyi, the Chinese pirate leader active in the Strait of Malacca, once had tens of thousands men and hundreds of warships under him. He was not defeated until he met Chinese voyager Zheng He who set off for his great journey to Southeast Asia and farther. 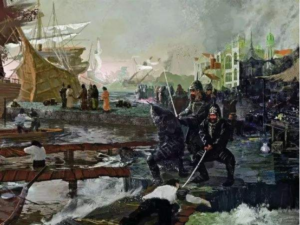 Composition of pirates in the Far East

In the Far East, there were Chinese members in both of the above-mentioned pirate groups. For example, regarding the so-called “Japanese pirates” in China, apart from Japanese ronins and samurais, Chinese outlaws actually took up larger part of them. Chinese pirate leaders such as Wang Zhi and Zheng Zhilong were both powerful warlords, even the latter one became a provincial magnate and the pillar of Chinese government, while his son Zheng Chenggong later founded the Kingdom of Tungning.