In the history of piracy, the coastal areas of China, Japan and Korean peninsula were all active areas of pirates. Deeply influenced by Chinese culture, pirates in these areas had a distinctive style from their European peers, but they still had an important position in the history of piracy. These eastern pirates even appeared in the Pirates of the Caribbean film series.

Speaking of the eastern pirates, Wokou is an inevitable topic.

Wokou is a general term of the Japanese pirate groups which invaded coastal areas of Korea, China and Southeast Asia between the 13th and 16th century. Besides piracy, they were also involved in smuggling between China and Japan. As Japan was referred to as Woguo in ancient Chinese book, therefore these Japanese pirates were called Wokou.

What was the composition of Wokou? 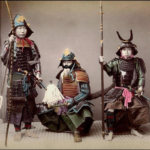 The early Wokou pirates were headmen (nanushi), manor employees (shoji) and unemployed people from the coastal areas of Kyushu Island. In the early 14th century, Japan entered the Nanboku-chō period where Japanese noblemen who were defeated in the long-term conflicts began to organize samurais to plunder Cinese and Korean coasts. After the mid-16th century, as a result of the political chaos in Japan, Japanese pirates began to cooperate with their Chinese peers like Wang Zhi and Xu hai. They attacked and plundered villages and towns in the coastal provinces of China such as Zhejiang and Fujian. During this time, Chinese pirates became the majority of Wokou, even accounted for over 80% of Wokou pirates. Meanwhile, there were also some Japanese, Korean, even Portuguese and Malaysian in the Wokou organizations.

Actually, the most fundamental reason lies in that both China and Japan have long coastlines, but the government ban deprives people of their right of maritime trade. 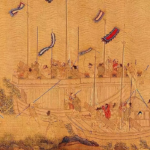 Weapons used by Wokou: Wokou used various weapons, but there were two highly representative weapons: Japanese sword and yahata ship. As many Wokou liked to sail with yahata flags, therefore in coastal areas of China, Wokou ships were also called “Bafanchuan” (yahata ship). But in fact, Wokou used all kinds of ships, including fishing boasts, Japanese atakebunes and Chinese junks, whatever they had. 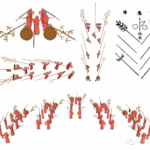 Weapons used by Ming troops: the most representative weapon used by Ming troops was langxian, a kind of weapon made of bamboo. In the war against Wokou pirates, langxian was the weapon which could be made with local resources. General Qi Jiguang ordered his men to cut down local bamboos from roots, reserved thick branches and installed spearhead at the top end. When in formation, Chinese soldiers equipped with langxian could defeat Wokou pirates who mainly used swords. Ming troops also used Japanese swords and firearms such as matchlocks. 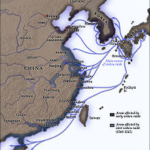 In the early 13th century, people in the south of Korean peninsula were the first victims of harassments by Wokou pirates from Tsushima, Ikishima and Matsuura peninsula in Japan. Wokou began to harass China from the 14th century, later than their activities in Korea. During the early period of 15th century, despite being frightened by the military strength of Ming China, they still launched small-scale harassing attacks in coastal provinces like Liaoning, Shandong and Zhejiang. Since the late 16th century, Wokou pirates had been concentrated on massive attacks on the Chinese coastline, including Liaoning, Shandong, Zhejiang, Fujian and Guangdong. At the same time, Japan and Southeast Asia were also attacked. 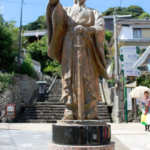 Wang Zhi: born in Shexian, Anhui; a merchant in maritime trade and a famous pirate during the Ming dynasty, as known as Wufengchuanzhu. Wang Zhi is famous for his key role in the introduction of matchlocks into Japan. Wang Zhi once commanded all the Wokou pirates along the Chinese coastline. At his peak, there were tens of thousands of pirates under him. But he only aimed at the authorization for trade. After being offered amnesty by General Hu Zongxian who presided over the government’s response to the Wokou pirate raids, he was trapped and executed by Wang Bengu, the viceroy of Hangzhou. His death led to another rampancy of Wokou pirates in the following ten years.

Xu Hai: also born in Shexian, Anhui; one of the Wokou leaders during the reign of the Jiajin Emperor. He was once a subordinate of Wang Zhi, later founded his own pirate group which was only second to Wang Zhi’s force. He had commanded three massive Wokou raids in the Yangtze River delta area. Afterwards, he was lured into surrender by General Hu Zongxian, and thus forced to drown himself. His wife was Wang Cuiqiao, a famous prostitute.

When the Wokou pirates were exterminated 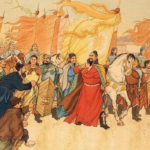