Religious symbolism refers to the use of symbols, including prototypes, actions, works of art, time, or natural phenomena, by a certain religion. Religions regard religious textbooks, rituals, and works of art as symbols of compelling ideas, or ideal symbols. Symbols help create a resonant theme which expresses the moral values of a society or practices of a religion, promote solidarity among believers, and get believers closer to their object of worship. 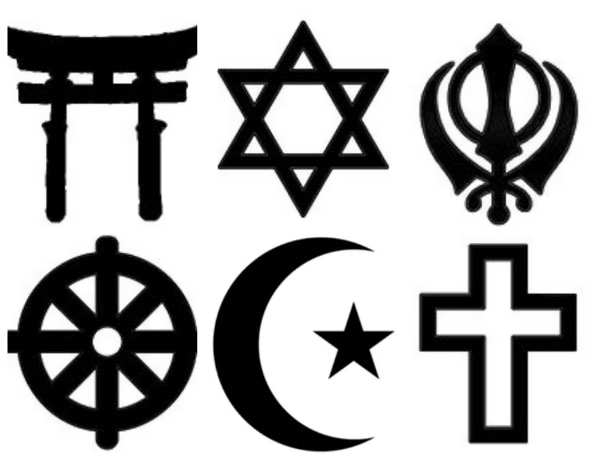 Here are some of the most popular religious symbols in the past.

The Happy Man is the official symbol of the International Humanist and Ethical Union (IHEU, a global organization for Humanism), and alao an immortal symbol. Many Humanist organizations and individuals worldwide adopt it. It originated from a competition for organization symbol organized by the British Humanist Association in 1965. The winning symbol was designed by Denis Barrington.

It often represents self-reflection or cycle, especially those constantly recreating themselves, the eternal reincarnation, and some other things considered to be cycles that start all over again when they end. 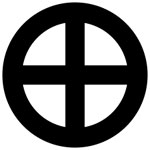 The sun cross (more widely known as the sun wheel, a cross inside a circle) is a commonly-used symbol in antiques from prehistoric Europe, especially the period between the Neolithic and the Bronze Age. 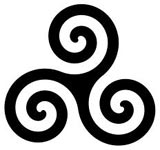 A triskelion or triskele is a spiral line consisting of three interlocked spirals, or three bent legs, or any similar symbol with three protrusions and threefold rotational symmetry. Triskelion is the symbol of Brittany, as well as the Isle of Man and Sicily (which is called Trinacria locally).

On almost every stupa (Buddhist shrine) in Nepal, there are pairs of huge eyes staring out from the main tower.

These Buddha Eyes (or the Wisdom Eyes) look out in the four directions, symbolizing the omniscience (seeing everything) of a Buddha. 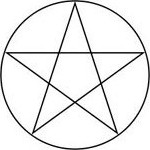 Here is an upside-down pentagram, it also appears with the right side up. Pentagram is the shape of a five-pointed star drawn with five straight lines. Such pentagrams were used in ancient Greece and Babylonia as symbolic marks. And today they are used as a symbol of faith by many wizards or witches, similar to Christians’ cross and Jews’ Star of David. The pentagram has a magical symbolic significance, and many pagans wear this symbol together with jewelry. Christians often used the pentagram to represent the five wounds of Jesus. The pentagram is associated with Freemasonry and also used by some other belief systems.

The Hands of God 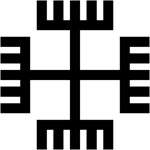 It is the most popular symbol of Slavic Neopaganism, or more specifically, the symbol of panentheism advocated by the RPK, also known as “the Hands of God”.

The Ankh often appears in Egyptian tomb paintings and other works of art, usually at the fingertips of a god or goddess in images, representing the deities bringing the afterlives to the mummies; it is also believe to symbolize the pregnancy. The Ankh is the most sacred symbol in ancient Egypt. In addition, the ankh was often carried by ancient Egyptians as an amulet alone or together with two other symbols that stand for “strength” and “health”. Mirrors made of metal were often made in the shape of ankh, either for decorative reasons or to symbolize the cognition of another world.

The ankh was almost never drawn in silver; as a symbol of sun, ancient Egyptians almost often use gold, the metal most associated with the sun, to make important examples of it (for tombs or other purposes). A similar metal is copper, which was polished to certain glossiness, and sometimes used to make such symbols. 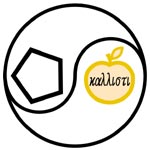 The image of the angel Moroni blowing a trumpet is commonly used as an unofficial symbol of The Church of Jesus Christ of Latter-day Saints. Moroni appears on the cover of some editions of the Book of Mormon, and statues of this angel stand on the top of many LDS temples, most statues face eastward.

This symbol appeared in the Byzantine Empire in large numbers in the 9th century. During that time, this double-cross symbol was not a religious symbol, but a political symbol used by government officials and missionaries. One of its modern interpretations is that it represents Slovakia, an heir and guardian of Christian traditions who was brought to the region by Saint Cyril and Saint Methodius, two missionaries from the Byzantine Empire.

The cross-shaped sign, appearing in the simplest form by a crossing of two lines at right angles. In both East and West, this symbol was introduced much earlier than Christianity. It can be dated back to a very remote period of human civilization. As it has both ornamental values and religious significance, it is used for many purposes. The Christian Cross appears in many different forms.

Over centuries, when the fleur-de-lis appear on countless European coats of arms and flags, it is particularly associated with the French monarchy in certain historical context, and continues to appear in the arms of the King of Spain and the Grand Duke of Luxembourg, members of the House of Bourbon. It remains an enduring symbol of France. Although it has never been adopted officially by any member of the French Republic, but it appears on French postage stamps.  According to French historian Georges Duby, the three leaves represent the medieval social classes: those who worked, those who fought and those who prayed. 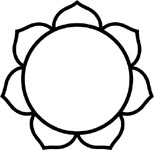 From ancient times, the lotus has been a divine symbol in Asian traditions, representing the virtues of sexual purity and non-attachment.

Hindus revere it with the divinities. Vishnu and Lakshmi are often portrayed on a pink lotus in iconography. In order to represent Vishnu as Padmanabha, a lotus is drawn on his navel from where the Brahma is born.

Goddess Sarasvati is portrayed on a white lotus, and often used to symbolize the divine beauty. Vishnu is often described as a lotus-eyed god, its unfolding petals suggest the expansion of the soul. 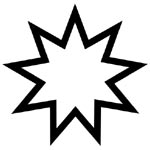 The most commonly used symbol connected to the number 9 is the nine-pointed star; it has no particular design, but is used more often than others.

The Ayyavazhi symbol is a lotus carrying a flame-shaped white ‘Namam’. The lotus represents the 1,008-petalled Sahasrara and the Namam represents “soul” or “self”.

The Winged Heart or Tughra Inayati

The symbol of Universal Sufism is the Tughra Inayati or the “Winged Heart”.

The winged heart is an ancient Sufi symbol, which was chosen by Inayat Khan as the seal of the “Sufi Order of the West” in 1910.  The original rendering of this winged heart calligraphy was presented to Vilayat Inayat Khan on his 73rd birthday.

The shape of the tughra symbolizes that the heart desires heaven. The crescent in the heart stands for the responsiveness and potential of the heart.

Unicursal hexagram is a hexagram or six-pointed star that can be drawn unicursally, in one continuous line rather than by two overlaid triangles. The hexagram can also be drawn inside a circle with the points touching it.

It is used in the Greek and Hindu mythologies as a symbol of dedication to the divine rulers. 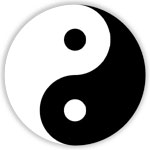 In Chinese philosophy, the concept of yin yang (normally referred to as yin and yang in the West) is used to describe how polar or seemingly contrary forces are interconnected and interdependent in the natural world, and how they give rise to each other in turn. Opposites can only exist in relation to each other, this concept lies at the origins of many branches of classical Chinese science and philosophy.

It becomes the primary guideline of traditional Chinese medicine, and central principle of different forms of Chinese martial arts and exercise, such as baguazhang, taijiquan (tai chi), qigong (Chi Kung) and of I Ching divination. Many natural dualities, such as dark and light, female and male, low and high, cold and hot, are considered manifestations of yin and yang respectively. 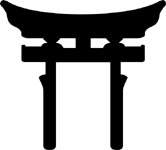 A torii is a traditional Japanese gate most commonly seen at the entrance of or within a Shinto shrine, where it symbolically marks the transition from the profane to the sacred.

In this symbol, the sword to the left represents truth, and the one to the right represents the willingness to fight for justice- dharma (religion); the circle in the center means that there is only one God, and there is never beginning or ending. 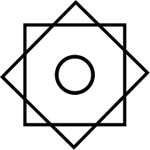 This eight-pointed star was a symbol of Tartessos, an ancient civilization based in Andalusia. As this region was ruled by Islamic dynasties for eight centuries, this may be a possible origin of the Rub el Hizb. In Arabic calligraphy, this symbol is used as a marker of the end of a chapter. 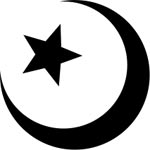 The star and crescent appeared in combination in ancient Israel and surrounding areas. It has been associated with the Moabites (14th BC or earlier 13th-6th century BC), as the symbols on Moabite name seals. In the 19th century, it represented the Ottoman Empire. And it had been on the Ottoman flag since 1793. The Ottoman flag adopted in 1844 continues to be used as the flag of the Republic of Turkey.