In Icelandic magic, the simplest magic symbol is the basic design of Ægishjalmur or the “Helm of Awe”. It is one of the most mysterious and powerful symbols in Norse mythology, there is explicit description regarding this symbol in 16th-century Icelandic grimoire Galdrabók. It remains the most representative symbol in modern Iceland. You can find that people who love Nordic culture like to tattoo this symbol on their bodies.

The name of this symbol is always related to “the power of serpent” inside human body. In Icelandic myths, it was related to Fafnir, a serpent or dragon slain by legendary hero Sigurd. According to myths, it is one item Sigurd took from the dragon Fafnir’s hoard.

Composition of the Helm of Awe 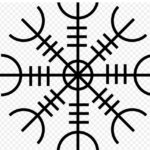 The Helm of Awe symbol is based on a cross structure, from the central point there stretches trident-shaped arms. The Helm of Awe usually has eight, six or four arms. In eight-arm version, the arms point to the “ættir” of sky and ground; in six-arm design, the arms stand for the four main directions and a vertical axis; and in the four-arm one, the arms refers to the main directions of the secular universe. However, there could be Helm of Awe designs with more arms. Similar to the most ancient symbols of power, the design of Helm of Awe is not immutable; its lines could be curve or straight.

Legend about the origin of Helm of Awe 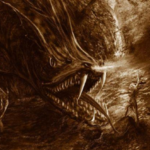 Fafnir, a cursed dwarf, became a scary and greedy dragon guarding the treasures he stole, including the magical ring Andvaranaut. The Fafnir dragon wore Helm of Awe between his eyes, and his great power was largely originated from Helm of Awe. Fafnir was slain by the valiant Sigurd, as he possessed too much gold and jewelries.

Application of Helm of Awe 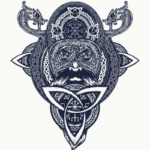 Norse people, particularly women, liked to draw this symbol on their foreheads. Certainly, to make things more “metal”, the Helm of Awe works best when being bled or spit on. This symbol was usually carved on the inner side of helmet so as to rest it between the eyes. The animation Fullmetal Alchemist was inspired from this symbol.

This symbol is used not just because it looks cool. You know, the protection brought by Helm of Awe is not the nature. It is also a symbol of dominance in conflicts. More importantly, it stands for the capability of inspiring fear on others and suppressing the fear inside

Imagine it as a mirror: when you feel scared after seeing horrible enemies charging towards you, you just reflect fear on them. You become non-transparent and only focus on the job at hand: destroying them.

Under some circumstances, it is believed that the Helm of Awe helps in sexual life; while in some other cases, it helps you to make your angry boss calm down. According to linguist and symbologist Stephen Flowers, although the Helm of Awe (Ægishjálmr) mentioned in the Poetic Edda was a magical item (most people believed it was a helmet with this symbol), but in Old Norse the word jálmr originally means ”cover”. According to his deduction: the Helm of Awe is originally some kind of magical energy to make enemies fear.