Among Nordic symbols, Viking Compass/vegvísir and Helm of Awe/aegishjàlmr are the closest and the least distinguishable. They are similar to each other, but also quite different in origin and meaning. There is even slight difference in composition.

The origin of Helm of Awe/Aegishjàlmr : a mysterious story about dragon Fafnir and Sigurd in Norse mythology. It is a mysterious symbol passed down from the Viking Age.
Fafnir, a cursed dwarf, became a scary and greedy dragon guarding the treasures he stole, including the magical ring Andvaranaut. The Fafnir dragon wore Helm of Awe between his eyes, and his great power was largely originated from Helm of Awe. Fafnir was slain by the valiant Sigurd, as he possessed too much gold and jewelries. 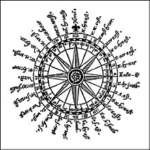 The origin of Viking Compass/vegvísir : Huld Manuscript and Galdrabók collected by Geir Vigfusson in 1880. But there is no specific records in historic documents.

The origin of vegvísir remains unknown, there is also some controversy about it. At present there are two known written source: the Huld Manuscript and Galdrabók collected by Geir Vigfusson in 1880. The Galdrabók is an Icelandic grimoire.

The meaning of  Helm of Awe/aegishjàlm : it is considered of magic, even was used in actual combat during the Viking Age. This symbol is used not just because it looks cool. You know, the protection brought by Helm of Awe is not the nature. It is also a symbol of dominance in conflicts. More importantly, it stands for the capability of inspiring fear on others and suppressing the fear inside.

The meaning of  Viking Compass/vegvísir: till today, vegvísir is not completely interpreted, its function and application range are also unclear, so it is only used as a reference. Some people believed that the eight runic staves in vegvísir respectively stand for the eight direction (north, south, west, east, northwest, northeast, southwest, southeast). They and the central point also represent the nine realm in Norse mythology. The central point stands for Midgard, the human world in Norse mythology, as well as the sign posts to the other eight realms and the corresponding protection. 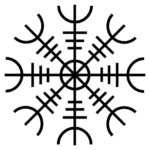 Helm of Awe/aegishjàlm Composition: it is not immutable, its lines could be curve or straight, and the number of lines might be different. The Helm of Awe symbol is based on a cross structure, from the central point there stretches trident-shaped arms. The Helm of Awe usually has eight, six or four arms. In eight-arm version, the arms point to the “ættir” of sky and ground; in six-arm design, the arms stand for the four main directions and a vertical axis; and in the four-arm one, the arms refers to the main directions of the secular universe. However, there could be Helm of Awe designs with more arms. Similar to the most ancient symbols of power, the design of Helm of Awe is not immutable; its lines could be curve or straight. 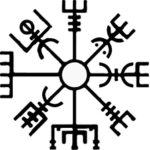 Viking Compass/vegvisir Composition: basically it is of eight arms indicating the eight directions. The vegvísir is composed of eight Viking runic staves. It is similar to the Helm of Awe/Aegishjàlmr, but there are some differences between them. The eight runic staves in vegvisir respectively stand for four cardinals (north, south, west and east) and four directions between mandrels (northwest, northeast, southwest and southeast). The eight directions and the central point (which stands for the Midgard) are the basic elements in the composition of vegvísir.