Vikings were the most influential pirate group in Europe. Although their glorious days were gone, but their culture, including lifestyle, costumes and customs, is still admired by modern people. Among these cultural heritages, Viking wedding is mysterious to us. Details like what the Viking wedding was like or if they wear rings on the wedding, were unclear to us and seldom followed. But there are some related records in historic documents.

The marriage of a Viking woman was decided by her whole family, but she can make a choice from the given candidates. After wedding, she could retain the properties she formerly possessed, and take care of the land when her husband was away from home. Divorce was also simple, the couple made a statement in front of the notary and clarified the reason. Some reasons were absurd, for example, the husband complained that his wife wore trousers instead of skirt. 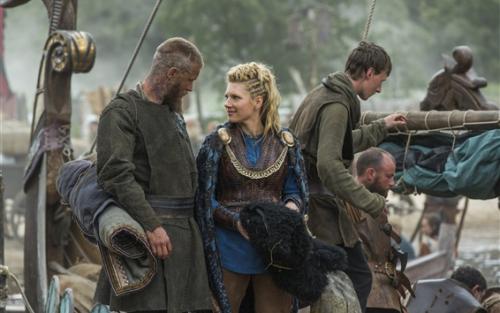 The marriage of a Viking woman was usually decided by her parents, althrough she had the right to veto the arrangement. But if she disobeyed her parents and married someone without family consent, her husband would be considered a criminal and legitimately executed by her family members. The husband could ask for a divorce only if he had a sufficient reason, otherwise the wife’s family could kill him at will. When a Viking woman just got married, she possessed one thirds of his husband’s property, and twenty years later half of the property; she could also give advices on her husband’s career, and freely talk with male guests at home.

The procedures of Viking wedding

Before the wedding, the bride would take off her golden ring, which was a gilded ring worn by an unmarried woman on her fluffy hair. She would likely replace this ring with a wedding tiara while the ring would be left to her daughter.

The bridegroom must get a sword from one of his ancestors. At present it is still unclear if the bridegroom would break into the tomb of a dead ancestor and get the sword, break into a fake tomb for sword, or ask for one from an alive relative. During the wedding, the bridegroom would carry his sword, and might also take a hammer or axe which represented Thor. There would be no specific wedding dresses for bride and bridegroom.

The wedding was usually held on Friday, which was the day of Frige. The wedding would start with drawing the attention of the Gods, might be by sacrificing an animal for one of the Gods.

After the wedding, they would go to the hall for banquet. In the hall, bridegroom would help his bride to step over the threshold, then stick his sword into a pillar. The deeper his sword was stuck, the more luck and children they would have. At that night and in the following month, this couple would have to drink some wine, usually mead.

When the banquet was over, this couple would go to bed with a witness, who would certify that their marriage was completed. In the next morning, the bride would tie up her hair and cover it with a cloth, so as to identify herself as a married woman. Then the bridegroom would give her wife the key to his house.

Did Vikings wear rings on the wedding?

At present it is unknown to us if Vikings wear rings on the wedding, but given the excellent jewelry-manufacturing technology of Vikings, wedding jewelries like rings should exist. Modern people make Viking-style wedding rings according to the Norse myths, but it is still unknown to us what the real Viking wedding ring was like.